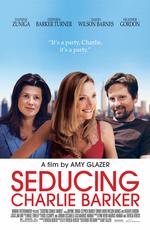 "Seducing Charlie Barker" is a great character study filled with unexpected twists and turns and comic interactions. The characters are light and funny. The situations start out realistic but always with an unexpected twist with comic results. Although it begins slowly, as the plot thickens, the interplay between the four leads…

It is nice to see a leading lady who makes no excuses for who she is. She allows herself to be aggressive, violent and even insane, yet likable, withdrawn, introverted and vulnerable. Lisbeth Salander is a character many actresses both dream about yet fear. The beautiful Rooney Mara stripped away convention, literally, to become this part. No more Hollywood glamour ... saying this character is rough around the edges is an…

Writer-director Shayne Leighton, who also starred in "The Incubus," said she feels humbled to see her film in Blockbuster and by the fact that it can be watched by people all over the country. When she went into Blockbuster for a photo-op after the release date on Dec. 6, she found not only did the staff recognize her, but also someone had already rented out the movie. Now, that is star-power! The film already had a limited theatrical release and has a popular soundtrack based on the…

For local filmmaker Carlos Cruz, his weight loss has been an uphill battle. Through poor diet, he amassed over 300 pounds on his 5'8" frame at one point... His weight climbed and fell like a yo-yo throughout his life. He ended up with Diabetes. But one particular visit to the hospital, which happened to be on his last birthday, was a turning point. His sugar was out of control. His body seemed to be breaking down and other…

"The Legend of Ivan Tors"

For film community -- Mega Holiday party at Tokyo Blue 9 p.m. until 5 a.m. at the Ocean Manor Resort Hotel. Enjoy a night of live DJ, food, drinks and networking in the lounge, pool side and ocean front.

Proper attire required so DRESS TO IMPRESS! There will be professional photography and video.

$10 at the door
Valet parking available

Please bring a $15 gift card from Walmart, Target, or Kmart (the preferred stores) for children in need at 4Kids of South Florida (www.4kidsofsfl.org) -- not required to attend, but must RSVP and pre-pay by Dec. 12 at http://fmptapbb.webs.com/apps/webstore. FMPTA Paid members: $15, Non-Members:…