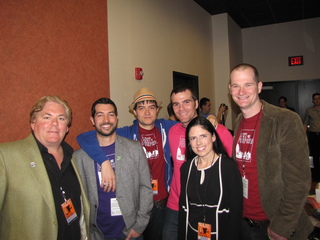 (On left: "crew" of "Lost on Purpose" with I.S. Founder Rachel Galvin)

Directors Ian and Eshom Nelms have created several films in the past. In fact, their film "Night of the Dog" was shown at the Palm Beach International Film Festival before and won an audience award, among other accolades as it hit the film circuit.

Now these brothers are back at PBIFF with their feature film "Lost on Purpose." Starring Jane Kaczmarek, C. Thomas Howell, Octavia Spencer, among many other well-known actors, this film is a love letter to the Central Valley (Visalia, CA) where they grew up. The setting revolves around five guys who work a dairy farm operated by a feisty woman, Elizabeth James, played by Kaczmarek, who struggles to keep her business alive and away from greedy takers like Delbert Furgeson (Howell) while the bills mount. The brothers have struggles of their own as they try to make their way after college.  Whether it is trying to get along with the locals, be successful with the opposite sex or make it in showbiz as part of a band, these boys find life isn't quite so easy, but it is made easier by a beer and the support of each other.

Shot mostly at "the magic hour," everything about the visuals in this film says rural America, from the sweeping landscapes to the wardrobe and props. For those who grew up in small towns, the characters and situations are familiar, nostalgic. Rather than going for a standard arc, the directors opted for more of a ensemble slice of life piece, which was inspired by films like "Dazed and Confused" and "American Graffiti." Meant to be more of a look at a stretch of time in this group's life, the film deals with the ups and downs of life in a realistic fashion. Life comes at them like a lazy rolling river. They don't know which rock they might hit next, but they keep on rolling through. This concept is played several times through the movie in a long sequence showing the boys enjoying their spirits and trying to raise their spirits while floating down a river.

Although there is drama in the film, the majority of it has a lighter tone. The boys (in their late 20s and 30s) who work in the dairy struggle mostly with their relationships with their families as well as others. The underlying emotion and pent up anger gets the best of them sometimes, while other times leads to reconciliation.

The "boys" are played by James Lafferty, Aaron Hill, Michael Lawson, Tom Fugedi and Peter Donovan. These actors have familiar faces from their work on TV and movies. They hold their ground pretty well in their roles. Peter Donovan was not even an actor, but his pratfalls and acting certainly would suggest otherwise. He sings the soundtrack to the film with his band All the Real Girls. Although Kaczmarek conquers this brassy role, C. Thomas Howell really seems to steal the show in his scenes with his quick bravado and charm as he saunters into Ms. Liz's life. Octavia Spencer is one of the comic elements in the film. Look for many comic asides throughout the movie from most of the characters.

The movie has real heart. It not only showcases friendship, but also the importance of sticking to what you believe in and not caving in. The characters in this film are who they are and won't back down for anyone no matter how much conflict it might cause. They are unabashedly genuine. There is something refreshing about that concept, so unlike Tinsel Town's usual fare. The directors have also stood up to their principles by not allowing would-be distributors to chop up their image. For them, this project is personal.

Don't expect everything to wrap up in a nice little bow in this picture. There will be unresolved issues and not-so-happy endings, but, then again, that's life. The film does seem long in parts, but that is because they are trying to fit in so many different situations and are dealing with showcasing the lives of many different characters. But the pacing adds to the concept that they are lost, but ... it is on purpose! It isn't about a quick trip. It is about the journey. For those who want to reminisce about small town America, this film is for you.

Listen to the interview with the directors: http://www.blogtalkradio.com/indiestreak/2013/04/07/interview-ian-e...