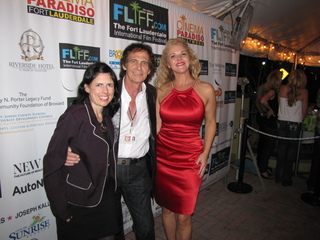 "Krissy Belle" premiered at FLIFF at Cinema Paradiso on Nov. 4 to a great audience response.

Comical and delightful, this film, directed by Alyn Darnay,  follows a naive southern belle as she navigates her way through the culture shock that Miami offers her.

Leading actress and screenwriter Carole Wood becomes her character, naive and ditzy with a spark of spunk, she gets herself into the darnedest situations and runs into some equally comical characters. One such character is the rude next door neighbor, a hot Latina with fire of her own who doesn't take kindly to Krissy Belle's simpleton ways. This part is played by Vivi Pineda, who certainly makes a splash whenever she graces the screen with her presence.But every character has something to offer, even Krissy Belle's adorable dog Remington, who has a few bits of well-placed commentary of his own.

The clash between cultures brings plenty of humor and, for those who speak Spanish, those parts en espanol are very funny. Right now, the film is sans subtitles, although, due to popular demand, that may change. If not, it is worth brushing up on your Spanish to catch the full meaning of the subtleties. Although, even without knowing the language, it is easy to pick up on what is happening. Poor, Krissy Belle doesn't know Spanish either, so you are in good company.

Screening of "By Way of Home" 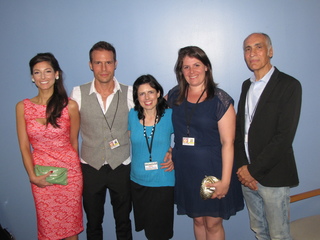 On Saturday, October 19, "By Way of Home" screened at Muvico Pompano. This was just one of the screenings of the film (The last screening is Monday at 5:30 p.m. at the Cinema Paradiso Hollywood location). The cast and crew of the film was in attendance and did a Q&A following. After, they were interviewed by I.S. Founder Rachel Galvin for Y.E. Ticket.com. Look for review coming soon here on I.S.

(Below: Cast & crew of "By Way of Home" with I.S. Founder Rachel Galvin)

Sign in, set up your own page with picture and video, email others and start networking!!!

Have you seen Artistic Times TV? I.S. Founder Rachel Galvin is the host. Here is the 2nd edition of the show:

“The Prancercise Lady” has a brand new video and DVD

She's back! Local sensation Joanna Rohrback a.k.a. “The Prancercise ® Lady” has already wowed the world with her unique approach to fitness. Now she is back with a new YouTube video http://youtu.be/cIXIZ_8aGM8, “Official Prancercise ®Fitness with Passion.” In this video, which also features horses, she works with a partner to demonstrate the additional depths and possibilities that her Prancercise ® program is worthy of.

In addition, she is offering a Director's Cut DVD in which she also offers her fitness tips, to stretch what her program can do to whole new heights. In addition, she offers a sneak peek behind the scenes of the production of her uber-popular YouTube videos. The work put into the videos and the passion behind the program are evident, as well as the sense of fun. Joanna has even included bloopers.

The liberating movement is certainly a break from the ordinary fitness scene. This Director's Cut DVD will be offered via her website www.prancercise.com. You can watch the DVD streaming or it can be shipped as a disc.

AUGUST ISSUE RELEASED The new issue features interviews with directors (like Michael Lobsinger, pictured), and with top acting coach Diane Christiansen, as well as event spotlights and more. Check it out at Independent Streak 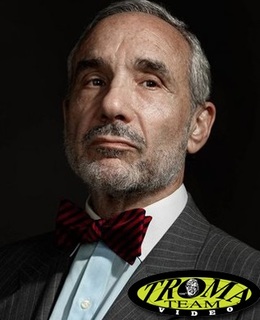 The July issue of Independent Streak Magazine is RELEASED.

The magazine features a story on indie guru Lloyd Kaufman; a Sci-Fi spotlight on "Radio Free Albemuth," starring Alanis Morisette, Shea Whigham and Jonathan Scarfe; a profile on Christian Filmers, a look back at May-Hem and more! See CLICKABLE WEBSITE.

RADIO FREE ALBEMUTH hits 10 markets on June 27.... or you can rent it right here! This sci-film IS everything Philip K. Dick would dream it to be. PKD, as he is coined, wrote books on which many classic films were based, films such as "Minority Report" "Blade Runner" and so many more. This film stars Shea Wigham, Jonathan Scarfe and Alanis Morissette.

Yekra is a revolutionary new distribution network for feature films.

From Philip K. Dick – author of Blade Runner, Minority Report and A Scanner Darkly – his most prophetic science fiction thriller. In an alternate reality 1985, Nick Brady (Jonathan Scarfe), a record store clerk in Berkeley begins to experience strange visions transmitted from an extra-terrestrial source he calls VALIS. He moves to Los Angeles with his wife, Rachel (Katheryn Winnick), where he becomes a successful music executive with a secret mission to overthrow the oppressive, totalitarian American regime helmed by President Fremont (Scott Wilson). But what is VALIS? A higher consciousness from another reality, an alien life-form or perhaps, even God? With the help of his best friend, a science-fiction writer – Philip K. Dick himself (Shea Whigham) – and a beautiful, mysterious woman named Silvia (Alanis Morissette)- Nick finds himself drawn into a conspiracy of cosmic, mind-shattering proportions. Although it might cost them their freedom or even their lives, they join forces to bring a message of hope from the stars and reveal the dangerous truth.

Submissions are now being accepted for the 2014 Red Shorts Film Fest as part of ArtServe's RedEYE REboot event on July 19th.

Audience Q & A's with the filmmakers will be held after each program and awards will presented after the last screening that will include (along with Official Selections) Audience Program Favorites, Overall Audience Favorite, Best Music Video, and Best of Fest.

Please visit the ArtServe website below and follow the RedEYE REboot exhibit link to Call to Artists with information on short films on page three:

The 15th annual Tromadance is almost here. What began as an alternative to Sundance, in the same town at the same time, has grown to be a fest of its own featuring fiercely independent films (and charging filmmakers no cover fee). This year's fest is June 27 & 28! It is located at Paper Box Music & Art, at 23 Meadow Street, in East Williamsburg, Brooklyn. Find out more about the fest at www.tromadance.com and tell Lloyd I (Rachel Galvin) say hello!

CALLING ALL FILMMAKERS! The 48 Hour Film Project, the largest filmmaking competition in the world, is coming to Miami (South FL)!

In a wild, sleepless weekend, you and your team will make a short movie from scratch—that is: writing, shooting and editing in only 48 hours. On Friday, June 20, you'll get a character, a prop, a line of dialogue and a genre, all to include in your movie. By Sunday, June 22, the movie must be complete. Each completed film is guaranteed a screening at Little Haiti Cultural Center in the following week.

To be part of the 48HFP, register online at:
http://www.48hourfilm.com/miami
Registration costs $160 per team, unless you register before May 26, in which case it's $140. Space is limited, so register today!
For more information, contact Cathleen Dean, Miami Producer of the 48 Hour Film Project at: miami@48hourfilm.com
Meet other South FL filmmakers, spend 48 hours in intense movie making, have your film screened at the Little Haiti Cultural Center, and compete to represent Miami against the other 48HFP cities around the world! The top films from around the world screen each year at the Cannes Film Festival.
Come on out and make a movie!

Get in on the Action
Ready to flex those filmmaking muscles and show the world what you can do in a single weekend? Here's some ways you can get involved with the Miami 48HFP this year…
Register your very own team:
http://www.48hourfilm.com/miami/registernow/

Attend one (or more) of our events:
http://www.48hourfilm.com/miami/#events 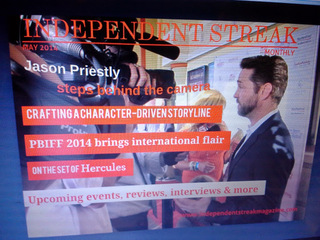 HAVE YOU SEEN THE NEW INDEPENDENT STREAK MAGAZINE??? CLICK HERE

Congratulations to all the winners:

Best Documentary, "Faberge: A Life of its Own," directed by Patrick Mark

Best Feature: "Life Inside Out," directed by Jill D' Agnenica 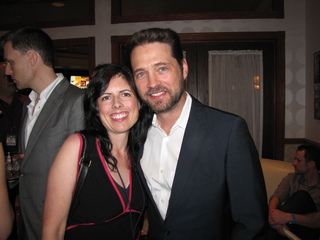 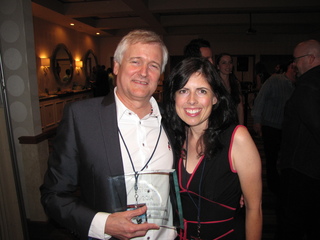 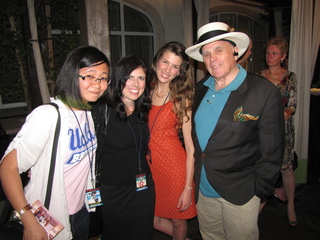 On April 5, EAU Spa in Manalapan was filled to the brim with filmmakers and film lovers enjoying the beautiful night sky outside while mingling and drinking martinis by Tito's Vodka. In fact, there were 2 martini bars and a cash bar available. With a beautiful location, filmmakers from around the world and a happy atmosphere, they evening was complete.

The Palm Beach International Film Festival (PBIFF) began its 19th year with a showing of "Belle" at Boca Cinemark. There was a red carpet out front before the events began and a party upstairs at Bogart's after (with another red carpet of sorts). Guests enjoyed music by The Sheffield Brothers band and a selection of vodka drinks sponsored by Tito's Vodka. Over 165 films will be shown throughout the fest, which runs through April 10, from 42 different countries and over 90 filmmakers in attendance. For more details on fest, visit www.pbifilmfest.org. Pictured below: Director Ian Vernon ("The War I Knew") and friend pose on red carpet.

See episode of "Fright Asylum" featuring I.S. Founder Rachel Galvin, who is interviewed by Woody Meckes. Fright Asylum is a horror review show that has quite a following and longevity. http://vimeo.com/89026632

You may want to check out CityWrights. There are multiple events and workshops held June 12-July 6. Get your details at www.citytheatre.com. Early submission ends April 30.