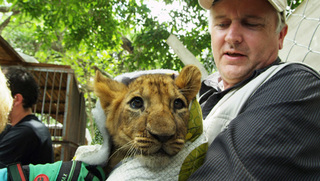 Tim Phillips has campaigned on animal protection issues for 30 years. His video and photographic images have exposed animal suffering and as a scriptwriter, director and editor. Tim has been awarded for his animal protection documentaries, advertisements and training videos. He has co-authored many reports and articles and helped draft animal protection legislation. Lion Ark is his first feature film.

He directs and appears in the documentary Lion Ark as Vice President and co-founder (along with wife Jan Creamer) of Animal Defenders International (ADI).

His film "Lion Ark" tracks the journey the group takes to rescue 25 lions from a life of torturous conditions in Bolivia's circuses. The group helped to put an end to circuses in this country and in others, and the rescued lions were sent to a Wildlife Refuge in Colorado. This is just one of the many animal rescues they have completed.