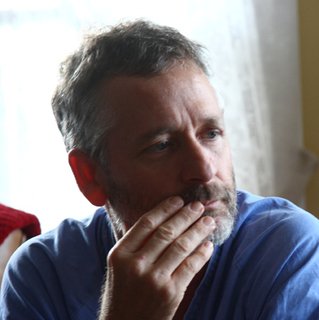 Banks Helfrich has been everything from a professional triathlete to a circus clown, a Harpo Marx look-alike at Universal Studios (Orlando FL) to David Letterman's the Ball Guy from "Is this Anything?" He is also a filmmaker, and writes and directs a feature every two years.  In 2009, "the donut, the balloon and the lifesaver" created buzz on the film festival circuit.  "the ah of life," has captured attention with the Audience Choice Award at UNA George Lindsey Film Festival, Best Feature at Independents' Film Festival, Best Trailer at Fearless Film Festival and acceptances at San Antonio Film Festival and Woods Hole Film Festival. These are just examples. All his films certainly have captured an audience.

His newest project is a very cerebral but funfilm called "fat, dumb and happy." The film follows Walter Quill, a writer who thinks he is God and who has a wife who pays more attention to the dogs than she does to him (or her kids). His kids similarly ignore him. Meanwhile, he has six weeks to get a finished best-selling novel to his agent. By looking at his own life, he is able to create a more happy reality in his own head. The juxtaposition between fantasy and reality leads him to ask the hard questions, like "Why is happiness so elusive" and "how do I brush too hard when I'm using a soft bristle brush?"