Telling the truth, making it funny 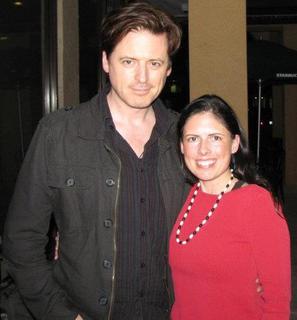 Comedian and actor John Fugelsang may be better known of late for his political banter on everything from CNN, MSNBC and Fox to the Stephanie MillerSexy Liberal Comedy Tour. But don't call him a pundit... or a journalist. When journalists stood up for his journalistic integrity during the recent “Etch-a-Sketch” incident (Google it) with Mitt Romney's adviser, he thought it funny. He also wondered why “they let 'the clown' ask a question” and noted they did not allow him to do a follow-up.

Yet, that incident has garnered attention around the country and prompted other GOP'ers to have their picture taken with Etch-a-Sketches and left Fugelsang autographing the toy for fans.

Fugelsang pulls no punches with his banter and that can be jarring in a world filled with spin doctors, but he means no malice, but rather simply wishes to speak the truth and make it funny. After all, as Billy Wilder said, “If you're going to tell people the truth, be funny or they'll kill you” – a motto he lives by.

He didn't intend to be a political commentator. Acting is his first love. He started in regional theater in Long Island, NY, doing Shakespearean plays like “Hamlet” (at age 12). Later, he got into film with movies like “Coyote Ugly” and TV shows like “CSI” and “Becker.”

He only got into stand up because he “wanted some stage time” and he seemed to have a face perfect for TV hosting so when VH1 came calling, he answered. The NYU alum saw his experience there interviewing rock stars like Paul McCartney and George Harrison as “grad school,” giving him experience he would later use in life. He also did a brief run as host of “America's Funniest Home Videos” with Daisy Fuentes – despite the paycheck, he bowed out eventually, realizing that it was not the gig for him. It wasn't the only time he would do that. Recently, he turned down a big budget sci-fi film because it was shooting at the same time as the birth of his child, Henry Jack, who is now 9 weeks old. Somehow, he thought fatherhood would slow his life down, but he is still so busy, it is hard to keep his schedule straight.

Besides the Stephanie Miller tour and being a part of her show, he does frequent guest host spots, including stepping in soon for Elliot Spitzer temporarily. He has a new webseries, which begins on YouTube next week called “Caffeinated,” a series of skits including comic geniuses like Laraine Newman (from classic SNL), George Carlin's daughter, Kelly, Paul Provenza and others comedians. Much like the Stephanie Miller tour, it will include irreverent and politically based humor. He was asked to do the webseries for the YouTube channel Polipop through Maker Studios. In addition, he is doing another tour with Hal Sparks (from Stephanie Miller show) called the Politics, Sex and Religion Tour. You can also catch him with his Laughing Liberally Tour. He is writing a book and he has several films coming out – “Price Check,” “Girl on the Train,” “Whole Truth” and “Coexist.” The latter he hopes becomes a tour – it includes a Muslim, a Buddhist, a Jew and an atheist comedian, along with him as the “Christian Comic” (although he is not what you might think a Christian comic should be, not squeaky clean. He likes to say that he says what is actually in the Bible, not what the “Jesus fan club” thinks is in there.)

Religion certainly has been a factor in his life, being that his mother is a former nun and his father was a Franciscan brother. In their household, Fugelsang learned less about dogma and more about the golden rule and that “Jesus is love.” He tells about the unconventional romance that caused his parents to break their vows to the church in his one-man show “Guilt: A Love Story,” which showed at the Parker Playhouse May 19, a show that has garnered standing ovations and brought in everyone from college kids to senior citizens, liberals and even conservatives. In the show, he also talks about how his mom guilted him and his girlfriend into getting married as his father was dying “to give him something to live for,” how the 3000 year old story of Onan, from the Bible, caused many of the church's hangups about sex today and more. There are many vignettes within the show, which allows him to showcase many characters and tell true-to-life stories that are sure to tickle the funny bone and also pull at the heartstrings.

“I would rather make people laugh for an hour and make them cry for the last 15. I want to make people feel,” he said, adding that it really is all about love. “We are all more alike than we are different.”

The play's next stop is June 16 in Minneapolis, MN. To find out more about this talented comedian, host, writer and actor, visit www.blog.johnfugelsang.com.