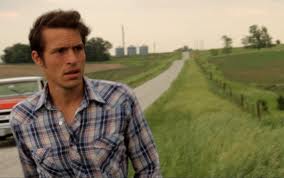 On Nov. 5 at Muvico Pompano and on Nov. 6 at Cinema Paradiso, the movie “Turbine” was shown for the Ft. Lauderdale International Film Festival. The creative duo behind this project, Isaak and Eva James, brother and sister, were at FLIFF just a few years ago showing their film “Hungry Years.” Now, they are back with “Turbine,” something completely different.

As the wind blows across the agricultural landscape of Rock Port, Missouri, a new couple, Nick and Sarah, try to make the best out of their “temporary” housing arrangements, a broken down sugar shanty with less than adequate accommodations. The duo came from big town Manhattan in hopes of a simpler life and a fresh chance at making their life better through having a child. Nick hopes to make his living here in the wind industry. Wind Turbines dot the landscape here, where farmers lack in crops, they can cash in on wind. Unfortunately, the “soil” in this open country isn't what it cracks up to be and the pair find their life slowly unraveling in a way they could have never predicted.

The seeds of discontent begin right away. Sarah's main aim is fertility and is frustrated that they have been unable to have children. Little does she know, her hubby secretly knows he is the problem. His feeling of emasculation has led him to promiscuity and to adultery, expressed vividly and graphically throughout the film.

When Nick strikes up a friendship and business relationship with Darius, the richest farmer in town, he doesn't know the tangled web he and his charming and beautiful wife, Madeline, weaves. Nick and Sarah in their loneliness, vulnerability and lack of self-esteem fall prey to these predators. Piece by piece, as morality falls away, they are left mere shells of their former selves and have to find a way to make it all right again. Although, by the end, it seems that nothing will ever be right when secrets are still left unshared.

This film is filled with symbols for those who seek them out, symbols of emasculation (wilted plants ) to cuckold (elk horns). A visit to a cemetery helps cement the idea that this new life is a dead-end, a wasteland, a hell that Nick and Sarah are devoured by and must eventually attempt to escape. After all, this small town is filled with gossipers, meth addicts, drunks, jobs with no upward mobility and farms that won't even produce. Nothing seems to blossom in Rock Port and idle hands lead to sinful deeds on this serene landscape. Darius says it best – “Things aren't always what they seem.”

This film is a character study, about the inner workings of the two couples and their delicate dance and the world around them. Isaak James, who serves not only as director, but also lead actor, does a brilliant job with showing the vulnerability mixed with callousness of a character who has lost any type of self-reliance. Grasping at straws, he turns to his basest instincts in an attempt to regain his footing, but finds it puts himself further and further away from his wife and deeper and deeper into new and frightening territory. Like a scared child, he cries out or thrashes out, living in reaction to the world because he does not know how to handle what is happening around him. Out of control, he falls victim to the whims of others and the excesses of life.

Anne Marie Nestor, who plays Sarah, keeps a low profile. Her emotions are guarded, silent, but stirring, until they brim over into anger at her husband's lack of attention and her inner knowing that something is amiss. In the end, she succumbs, just like her husband, to self-destruction in order to feel something again and to get revenge. If she cannot have a voice in her life, at least she can cause a commotion in other ways. It may be the only way she gets attention, that she can express her pain.

Madeline Clemens is portrayed by Whitney Parshall, who was also in “Hungry Years,” and who also attended the Ft. Lauderdale International Film Festival, along with the James'. Slow and sweet like molasses yet ever-so-subtle, she craft-fully combined saccharine and slight aloofness with a simple turn of a phrase given in a barely-there drawl. Like a siren, she draws in the characters and the audience as well before, like a black widow, she destroys them. But it is just her nature.

Michael J. Burg (also in “Hungry Years) played Darius Clemens, a powerful and compelling role, allowing him to show what lies beneath a subdued businessman, who is filled with pride, hospitality and power, but, underneath, is just as vulnerable as Nick, if not more so. He serves as a mirror for Nick, allowing Nick to express his inner self through knowing Darius and eventually move beyond the inner child, the little lost boy, and attempt to regain himself and his life. Darius, however, seems to be left to forever be stuck in his fate, sure to end up in the cemetery he so enjoyed in the film, left no wiser and a little sadder in the end.

Besides the great acting, this film is made by the cinematography. Although shot for a mere $40,000 budget, this picture looks much richer. Being shot on-location added to production value. Wide landscape shots, long dolly shots … the wide open spaces are captured beautifully, showing the charm of the countryside interspersed with the monotony of Bingo, a small town cafe where locals eat daily, broken down old main street and empty farms. For those who grew up in a small town, the scene will seem familiar, quaint. Contrasted with the city life of Manhattan, which is shown mostly through a quick indoor party scene, many moments are laughable, including meeting Nick's co-worker and listening to his lingo and the first impression of their new home. But the new customs of this place coupled with the enormity of the whirring windmills, adds to the feeling that Nick and Sarah are lost souls, just spinning their wheels in this new found hell, their cries unheard over the whirr, whirr, whirr …

The intemperance shown in this film in all its glory may be too much for some to take, but a closer look at the symbolism will help ossify that this picture is not just about showing sex, for instance, for sex's sake (yes, there is a lot of nudity), but as a symbol of greater meaning.

“Turbine” currently has distribution through Screen Media Films and will be available through Netflicks and iTunes. For more information on the film, visit www.lastditchpictures.com.  The film will be shown Nov. 17 at Fernandina Little Theater (see www.fliff.com for details).