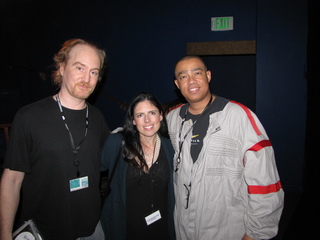 The pair, creators of Ginnungagap Filmwerks' Planet X, and stars of the hilarious and touching Journey to Planet X, have recently arrived home from Sedona Arizona where they attended another screening of their wildly successful documentary which will be broadcast on Epix May 1st.

However, resting on their laurels is not the way for Troy and Eric. They have begun production of their new feature-length film Temple of Joy, which is a time-travel epic set over several centuries of human history.

"We wanted to do a sci-fi film about time travel" says Producer, Director and Actor Troy Bernier. "We wanted to explore the idea that you can affect your own timeline through the actions you take in the past."

"Temple of Joy is vast" agrees partner Eric Swain "We've already shot in Spain, Florida, and Arizona and we have many more locations planned out." Though the pair are tight-lipped about their plans, there is rumor that one of the acts is located on a real pirate ship.

Though Ginnungagap Filmwerks have funded their past works entirely out of pocket, this time they are relying on the help of the community at large. Temple of Joy is by far the largest project they have worked on to date and also the most ambitious.

"There is no way we could fund Temple of Joy ourselves." Says Bernier. "We have many more location shots plus much more CG (Computer Graphic) and VFX (Visual Effects) planned to tell this story. We learned a lot filming Planet X and we're really hoping to raise the bar on our film productions and we're hoping the community can help us out."

Check out www.templeofjoythemovie.com to watch the trailer and find out how you can help these independent filmmakers.