In a mere 24 day shoot, director John Alan Simon has managed to capture the essence of iconic Sci-Fi writer Phillip K. Dick (PKD) with a movie based on Dick's book “Radio Free Albemuth.” For those not familiar with PKD, you may remember other movies based on his books, movies like “Blade Runner,” “Total Recall,” “Minority Report,” “Scanner Darkly” and “The Adjustment Bureau.”

Using the Viper camera, which he said is the same camera used in “The Curious Case of Benjamin Button,” Simon brought to life an alternative vision of 1985, in which a corrupt government reigns, run by President Fremont. This leader seems to be a ruthless dictator, an emperor over the people, reigning by taking away liberties and rights and getting neighbor to spy against neighbor. Fremont is Richard Nixon mixed with Joseph McCarthy. He believes a subversive organization called Aramchek is out to overthrow the government and uses his Friends of the American People (FAP) to do his dirty work to scout out potential subversives. 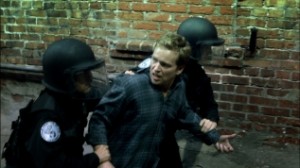 Meanwhile, Nicholas Brady (Jonathan Scarfe), a young man who works in a record store, is plagued by nightly visions provided by an extraterrestrial force called VALIS (Vast Active Living Intelligence System ). His buddy, referred to as “Phil”(but portraying Philp K. Dick) (Shea Whigham), a budding writer, is surprised by the turn of events and how quickly his friend seems to be following these messages and changing his life completely. PKD put himself into the autobiographical book the film was based on, when he wrote it in 1979 (the book was released in 1985), to try to make sense of visions he was actually experiencing, much like Brady.

The film also stars Alanis Morissette, who not shows her acting chops in a pivotal role, but also provides music for the film. In addition, Robyn Hitchock adds some memorable melodies to the score. Hitchcock, according to producer Elizabeth Karr, is like the Beatles to Simon, who counters by explaining that, indeed, in certain groups in the musical community, Hitchcock has a huge fan base. After listening to the soundtrack of this film, his base may grow; his songs are infectious, in a good way.

This film really stretches your brain power as it combines themes of divinity, the afterlife and philosophy, making the viewer question (like many PKD works) what reality really is and makes the viewer wonder if someone is trying to alter the very concept of reality. Indeed, it is very deep. Themes like this have led the gnostic community to embrace PKD whole-heartedly.

“There are no car chases,” said Simon, despite some wanting to add them in. Simon felt compelled to stick to the PKD feel overall. He felt he was successful. The other film he felt really stuck to PKD's vision is “Scanner Darkly.”

His love for PKD is evident.

He isn't the only PKD fan. It seems that cast and crew so embraced this film that they went out of their way to be a part of the team. In fact, they went along with deferred payments just to be involved with this privately-financed film.

Simon explained that they “knew they were going to play in the low budget sandbox, but they wanted to be a part of it.”

In order to get the large cast together (over 40 speaking parts), he needed a Casting Director. He sent the script out to Casting Director Ferne Cassel, who put it out to agents, like CAA, who represented Alanis Morrisette. When Morissette read the script, she was very interested and CAA arranged a meeting between the actress/ singer/ songwriter and Simon. When they sat down to talk Simon knew he had found his Sylvia, offering Alanis the part right there and then, a rare move. And in another rare moment, Morissette accepted immediately.

Karr said of the pair's meeting: “It was kismet.”

The speed with which this interaction went down not only shows how perfect Morissette was for her role, but also how much she believed in the project. It seems that the rest of the cast showed the same enthusiasm for this undertaking and for Simon's ability to pull it all together.

After all, Simon has quite the track record. In addition to working with the finances, production, sales and marketing of independent films like the original “The Wicker Man,” “The Haunting of Julia,” “Basket Case,” “The Howling, Part 2” and “Out of the Blue,” he has also worked on big budget films like “The Getaway,” as a producer.

Simon has acquired film rights to three PKD novels. Right now, he is working on another PKD work, “Flow my Tears, The Policeman Said...” He has already written the script and it was optioned last year by Halcyon Entertainment (“Terminator Salvation”) for a 2011 start date.

In “Radio Free Albemuth,” the special effects played a huge part in creating the overall feel of the film, from bringing VALIS on the big screen to visualizing the visions of Brady.

The scope of this project was huge with over 35 locations, a large cast and crew and an epic 118-minute concept that required keeping the audience engaged without all the big-budget gimmicks, like action sequences. It was quite an undertaking and one at which Simon excels. With intriguing characters, a twist and turn plot filled with mystery, an alternative universe with hints of films like “1984” or “Blade Runner,” but with a more realistic true-to-life feel (making it even more unsettling), this film is a must-see for any true Sci-Fi fan.

Simon and Karr (who is not only a co-producer, but also an actress who played Brady's mom in the movie – but found herself on the cutting room floor) are touring the film festival circuit. They have had showings at Houston World Fest, where they received a Special JuryAward, the Dallas USA Film Fest, the Sci Fi Hall of Fame Annual Awards in Seattle and the Geek Film Festival in Miami, where they received Best in Fest award. Right now, they are in Perth, Australia at the Revelation Film Festival (Jul. 14-24). This is not their first journey down under; they already showed the film at the Fantastic Planet Sydney Sci-Fi and Fantasy Film Festival,where the film received a Director's Choice Award and Shea Whigham won a Best Actor Award.

In addition to a continuation of the film fest circuit, Simon hopes to have a limited release of “Radio Free Albemuth” in the near future. For more information on this project and Simon's other ventures, visit www.radiofreealbemuth.com.