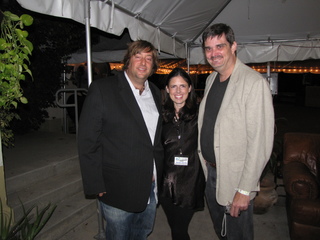 The film “Like Crazy” was shown as the closing film of the Ft. Lauderdale Film Festival on Nov. 11 at Cinema Paradiso and brought with it producer Jonathan Schwartz. This visually arresting romance delighted audiences, keeping them interested despite it being less action and more flirtatiousness and dialogue. Although some wanted it to continue, not happy with its seemingly unfinished ending, most understood the symbolism even up until the end and saw it as a complete piece that reminded them of every love they had ever experienced wrapped into one sensual bow.

The movie looks at the dilemma of the long-distance relationship and its ramifications. Intimate and real, this movie invites you into the romance and makes you fall in love. The long silences are pregnant with emotion and make you feel like a fly on the wall, almost ashamed you caught a glimpse at the interplay between these irresistible lovers.

The plot revolves around Anna (Felicity Jones), a British college student who falls for her classmate Jacob (Anton Yelchin), who does construction work on the side – making furniture. The problem arises when their love blossoms (complete with precious tokens of love) but is to be cut short when her visa runs out. Unable to bear possible separation, Anna, who later becomes an editor for a magazine in England, overstays her visa. The result is when she does go home, she is unable to return to the U.S.

What happens next is a cat and mouse game of the couple desperately trying to be together. Unfortunately, piecemeal everything starts to fall apart. The distance leads to doubt. The togetherness leads to yearning for something else. The jealousy sets in and, eventually, they each seek separate partners, but they still can't forget each other and communicate at the most inopportune times via text messages. The frustration and anguish is palpable and it effects not only the duo, but the others around them as they try to move on. Even when they are together, it is evident they can no longer be happy. Too much has happened now. They will leave again.

This film was the first to be picked up for distribution at Sundance this year. Shot “low-budget” with a Canon 7-D, the piece was almost entirely improvised. The actors were given an outline, knowing what needed to happen (be achieved) in each scene. The dialogue was up to them. This was a device used in order to add to the feel of the film, give it room to breathe. Producer Jonathan Schwartz said this allowed the actors (as well as the D.P.) to make the intimacy on the set. “You make the actors forget the cameras are there. There were long takes when they didn't even know we were rolling.” He added that the way it was shot seems more like a novella. Indeed, it is more a love story, then a movie ... and it makes the viewer anxious to flip the next page, using interesting effects to show the separation and the endless waiting, to show the passage of time.

Schwartz said they found British actress Felicity Jones via a video audition. She showered with her boyfriend and just went through all the emotions the character would go through, the focus being on her eyes, face. They found her incredible and knew she fit the role. Of course, Jacob's role went to the seasoned actor Anton Yelchin, who might be best known for his role as Chekov in “Star Trek.” Schwartz explained that not only is Yelchin a great actor, but possess a kind of vulnerability you don't find in boys his age. He was a perfect match. Other notable actors included Alex Kingston (“E.R.”) and Jennifer Lawrence (“X-Men”), as well as Finola Hughes and Oliver Muirhead, among others. Schwartz said the camaraderie on set “was like a family.” Kingston and Jones had worked together previously in a play.

The pre-production was short due to the actor's availability. It began March 10, and the shoot began June 1. The film was wrapped in July.

Schwartz has produced 10 films and three of them were with director Drake Doremus, who wrote “Like Crazy” with Ben York Jones (who played Ross in the film). Look for “Like Crazy” in a theater near you.